The North Star is the brightest, most fixed, and most visible star in the heavens. Since antiquity, it has been used for navigation across the unknown space of earth and sea. In the mythology of a band of Pawnee Indians, the creator gave the following instructions:  You shall stand in the north. You shall not move; for you shall be the chief of all the gods and you shall watch over them. The Chief Star represented order out of chaos in the affairs of its people.

Here Northstar Consulting Associates represents an available source of assistance for adopted people, regardless of their location, who have experienced a deep void in their origins and identities imposed by an American society, and its state laws, that has never grasped the repercussions of its deeds on the most vulnerable party to adoption.

To adopted people: Northstar affiliates want you to know we are here — you are not lost!

The well-referenced article by Silverstein and Kaplan (1982) observed that members of the adoption triad (birthparents, “adoptee”, and adoptive parents) share “7 core issues” in their adjustments over time. This conceptualization is repeated in their updated book “Seven Core Issues in Adoption and Permanency: A Comprehensive Guide to Promoting Understanding and Healing In Adoption, Foster Care, Kinship Families and Third Party Reproduction” (2019).

In various trainings across the country, their model has continued to be referenced as though a truism, without the necessary modifications that, since the era of the 1980’s and 1990’s, greater experience and understanding of the psychology of adoption – which must include the psychology of being adopted — now require. For example, some “issues” belong together as part of the same constellation, one is an attribution rather than a “core issue,” and an aspect of identity that is most fundamental to the experience of the adopted person was omitted altogether, as was one core constellation itself, that of complexities in sexuality. Further, despite a minor dimension relating to both sets of parents, the IDENTITY constellation and its many complexities belong exclusively to the adopted person, particularly in closed adoption.

From a psychotherapeutic perspective of the psychology of adoption, it is necessary to conceptualize eight complex,  overlapping constellations of internal experience involving emotion/feelings, perception/cognition, fantasy and unconscious associations, defensive responses (repression, denial), and conflict/adaptation – each very profound, each affecting the other, and each experienced by triad members both similarly and differently. The Psychology of Adoptive Status (being adopted) requires an understanding of these constellations from the perspective of the adopted person.

The eight core constellations in the psychology of adoption are represented in the following graphic: 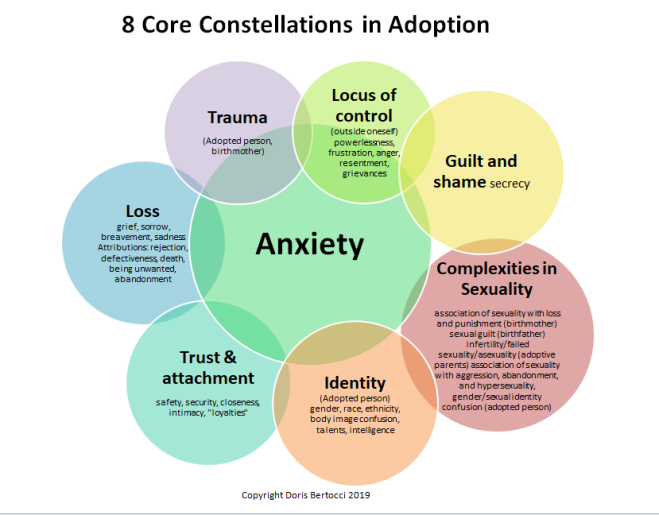